We had the best weekend in months at 123 Harlow Dr. with lots of family around, the pool is open, good news from the Colorado Gerber/Marines, it was Fathers Day, and Phyl had her energy and appetite back!

For the past week, she has been suffering with nausea and fatigue which we thought might have been caused by the only  ALS drug currently available, Riluzole.  After consulting with two neurologists we all agreed it was not worth the small, potential benefit from the drug.  As soon as she stopped taking it, she felt better.   She ate like a horse yesterday – without nausea… AND she woke up this morning with renewed vigor.

She said to me this morning, “life is good when you are feeling good!”  This was the cumulative effect of the weekend with our family, Brian and Belita’s good news about having their offer accepted on a house in Rhode Island, no nausea, and she was wearing her new foot brace.  She said before she put it on her back hurt, her foot dragged and she was walking really slowly.  With the brace on, her back pain went away and there was a spring in her step (literally as the brace gives her left foot lift).

She is working right now with her new Physical Therapist, who has worked with dozens of ALS and MS patients.  She will help me figure out what needs to be done to the house (eventually) like ramps, hand rails etc.  We like her – and she comes to the house! 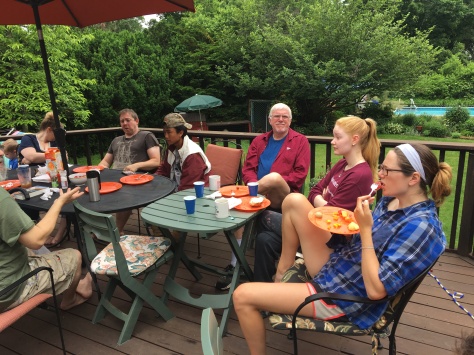 That’s the good news…. the sad news, is that Phyl’s Uncle Marty died.  Phyl and I used to visit Helen and Marty in Concord when we were both in college and they became very special people to us over the years.   When Phyl was first diagnosed with ALS we were in Eastern Mass having met with a neurologist at the Lehey ALS Clinic, who Helen and Martin recommended.  After we got the official bad news that day, Phyl knew that she needed to be close to her Aunt Helen immediately.  Both Helen and Marty were supportive, caring and concerned – and it helped her a great deal to know how much she is so loved by her Mother’s sister.

On the clinical front….. we applied to be enrolled in a trial of a new drug, AMX0035.   It is a phase two trial for safety and efficacy and will only accept 132 people (10 of them from UMass Medical in Worcester).  The good news is that it is the beginning of a “cocktail” that addresses multiple causes and both of the drugs in the cocktail have been tested for safety independently.  We spoke with the Head of Neurology at UMass Medical last week and he hopes Phyl will qualify for the trial.  The weird thing is that her symptoms might not yet be bad enough yet as she needs a definitive diagnosis of ALS.  Since the disease is developing so slowly….. we don’t know if she will be accepted.  He was hopeful to get her in the trial however.  Of course we are happy that the symptoms are developing so slowly…..

That’s my update for today and I’m glad it could be a (mostly) positive report.  I am going to help her glaze pottery this afternoon as she can’t lift the glaze containers…. so I’m becoming a potter!  We also just signed a contract to rent a house on the beach in Rhode Island (near Pt. Judith Lighthouse) for the last two weeks in August.  So, “life goes on” as my Mother says.

Click here for the next email in Phyl’s story

Creating The Beloved Community - Together