AMHERST, Mass. – Visitors to the Massachusetts Center for Interdisciplinary Renaissance Studies in Amherst, MA this summer can enjoy the

sense of traveling back in time to experience sights, smells and tastes of an authentic 16th-century kitchen garden, now open for tours.  UMass Stockbridge School of Agriculture Sustainable Food and Farming students raised historic fruit and vegetable varieties to create the full-scale replica on the center’s grounds.

Many plants chosen for the 1500’s-era garden are based on research by recent Mt. Holyoke environmental studies and nature culture history graduate Jennie Bergeron, who steeped herself in Renaissance herbal lore at the center’s library to help plan the project, which was first envisioned by Center Director, UMass Professor Arthur Kinney. 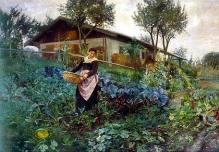 “This garden is what we are calling a ‘pottage’ or kitchen garden,” says Bergeron. “It represents the utilitarian garden of the common family of 400 years ago and contains both herbs and vegetables, with a couple kinds of flowers, but mainly herbs that were used in the daily pottage food stuff of commoners.”

“Pottage” was thin, onion- or garlic-based broth made with whatever was available from the garden or farmyard to provide the staple meal of working families. People in England, Germany, the Netherlands, Scandinavia and other northern European lands grew such crops as garlic, onions, turnips, beets, cabbage, fava beans, leeks and carrots in “pottage gardens” in medieval and Renaissance times.

Bergeron, who also serves as the head gardener for the project, s

ays most homes also had an herb garden. In addition, wealthier people could afford more than one garden for different purposes, such as a flower garden or “herber” for sweet-smelling blooms and plants. Herbs were categorized by their use: pot, cup, floor or distillery. Hops were grown for beer; fragrant plants such as angelica, anise, tansy, yarrow, evening primrose, coriander, mugwort, hyssop, horehound and vervain for flavoring food or for “strewing” on the dirt floor because they smell good or have anti-microbial properties.  The Center’s new garden has 49 different fruits and vegetables.

A special feature of the project was arranged by UMass Extension berry specialist Sonia Schloemann, who obtained small amounts of authentic heirloom beer hops and strawberry cuttings from the 16th and 17th century to come to the Renaissance Center garden from the USDA Germplasm Collection in Corvallis, Ore.

It will take a couple of years, but these small cuttings will be propagated by Stockbridge students in UMass greenhouses for use in the Renaissance Center gardens.  Strawberries in medieval times were much smaller and sweeter than the cultivars we are used to eating. But many other plants, for example herbs such as hyssop and anise have not changed much at all in 1,000 years. Many herb varieties we have today would be familiar to medieval gardeners.

Renaissance Center Librarian Jeff Goodhind has set up a display of books that Bergeron and her classmates used for her research, including a gardener’s almanac published in London in 1632 that lists garden chores by the month, a Latin “Dictionarium rusticum” or Rustic Dictionary from 1717 and a 1564 “Creuterbuch,” in German with hand-painted color plates, plus John Gerard’s famous folio of 1632.

The new garden, the adjacent Renaissance Apple Orchard and grounds are free and open to the public for tours and picnics from 10 a.m. to 4 p.m. Monday through Friday.  Renaissance Center staff are planning an…

…as well, for those who can’t visit during the week. A plant list and map of the pottage garden will be available for visitors.

Be sure and watch this 3 minute video describing the project.

For more background on this project, see:

For more ideas, videos and challenges, please join my Facebook Group; Just Food Now.   And also check out more World.edu posts.  If you like this project, you may be interested in the 15-credit Certificate, the 2-year Associate of Sciences degrees or the 4-year B.S. Sustainable Food and Farming major in the University of Massachusetts Stockbridge School of Agriculture.

Creating The Beloved Community - Together