With a deep breath and a prayer, I wade into a topic I have avoided writing about (or even talking about).  Although I’ve posted more than 100 blogs on Changing the Story over the past few years, I’ve rarely shared any thoughts on spirituality and never on religion.

So, why would anyone in their right mind want to write about something as controversial as their own particular form of religion – especially one as unpopular among academics as the Roman Catholic Church?

Why speak out now?

I’ve struggled with my own Catholic identity for more than 50 years, but over the past 15 years or so, I’ve felt “called” to a closer affiliation with the church of my youth.  This confuses me, as intellectually there is not much that is particularly attractive about the history, culture, or dogma of the Roman Catholic Church.  But I can’t seem to let it go – I’ve tried.  Writing about my doubts, struggles and faith, helps me clarify (for myself at least) what seems to be true.  So this is a bit of a selfish endeavor.  Hopefully, some readers will relate. 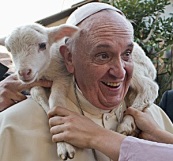 But really, it’s this new Pope!  Like many others I am attracted to his message, confused by his behavior (very “unpopelike”), and excited about the possibility of (someday) belonging to a church that no longer causes me embarrassment.

“Silence is the voice of complicity” – I’m told (and believe).  So when I am visiting with friends and colleagues who make bashing the Catholic Church a “sporting event” (all in good fun) I do get kind of squirmy.  In fact, at times I feel a knife in my heart – it hurts.  Truthfully, I’ve rarely heard anything negative said about the Church that I haven’t said myself.  And rarely do I hear anything that isn’t true – the Church has earned the bashing.

So why bother trying to understand, forgive, and participate in an institution that has done so much harm?   I remember walking to church as a kid with my dad and my younger brother, and feeling safe.  Like many, I rejected this Church as I grew older, but the church experience of my youth was one in which I was much loved.  I felt safe and protected.  We’ve come to learn that this wasn’t true for all young boys in the 1950’s – but it was my experience.

Today, in church services, discussion groups, conversation with other “seekers” in the church of my youth and now the church of my choice, I feel like I belong to something “bigger than myself.”  I’m not alone in my faith – or my doubt – or my pain.  I need to be part of a community as I try to make sense out of life – and suffering – and death.  And if I’m honest, I need to acknowledge that my faith has informed my teaching for years –  yet I’ve remained quiet – reluctant to say out loud that I am a practicing Roman Catholic.

Coming out of the closet

It isn’t “cool” to acknowledge that you are a “good Catholic” in academia (or anywhere else) these days.  It is much more acceptable to criticize the Catholic Church.  Isn’t it funny, that it seems acceptable to quote Buddhist texts while teaching college students?  I’ve certainly done so myself.  Hindu, Taoist, and other eastern religions are “wicked cool” today in American universities. And even other Christian denominations are less taboo than Catholicism.

Why have I (and other Christians) been so reluctant to quote the Gospels to make a point about sustainable living?   There is a lot of “good material” there!  For example…..

Pretty clear message here…..  if we love the divine, we need to feed those who are hungry.  I’ve spent a fair amount of time speaking and writing about our human obligation to make sure good and healthy food is accessible to all humans – feed my sheep.  But I’ve never used this memorable quote in my teaching or writing –  or even conversations with friends.

Pope Francis is never reluctant to quote the Gospels.   That’s his job!  He offered his support for the “One Human Family, Food For All” campaign in a video message released on the eve of the global launch.  He named world hunger a scandal!

With about one billion people still suffering from hunger today, “we cannot look the other way and pretend this does not exist”, he said in the message.  There is enough food in the world to feed everyone, he said, but only “if there is the will” to respect the “God-given rights of everyone to have access to adequate food”.

I believe that access to good and healthy food is a “God-given right.”  So why am I so reluctant to expose my own Catholic identify by quoting someone I admire (like Pope Francis  – or Jesus of Nazareth  – or Francis of Assisi) in my teaching and writing?

I have been hesitant to talk about my growing faith and commitment to my local church community (if not the hierarchy that continues to propagate its own self-serving dogma).  Its easy to “trash” the Roman Catholic Church and most people nod in agreement, but if you say something like “participating in the Mass is an important part of my week” – well, that is weird – at least among most of the people I know.

So this post is a chance for me to confess my lack of faith and to share my fear of sharing something that is so important to me.  I’m strengthened by the many past experiences I’ve had trying to practice Cardinal John Henry Newman’s motto “cor ad cor loquitur.”  That is…. “heart speaks to heart.”

Newman isn’t “embarrassing,” as he was instrumental in founding University College, Dublin, the largest university in Ireland today.  And he wrote a classic text on university leadership titled “The Idea of a University” which I admire.  Quoting Newman is safe!

But writing about my personal relationship with the Roman Catholic Church doesn’t feel safe.  Nevertheless…. I feel called to do so.  So with a deep breath and a prayer, this blog is my first attempt to speak from my heart to yours about being a Catholic academic.  If you have “ears to hear”….. well, please pray for me.

NOTE: I have had a 69-year “on-again/off-again” relationship with the Roman Catholic Church.  Pope Francis has given me hope that the Church can “be saved” and given me the courage to share a few thoughts about my Church.  A recent blog for example, dealt with how the Church has tried to silence a voice of change from within, the American Nuns, and how they have responded with intelligence and grace.  Another recent blog examined the Pope’s claim that global capitalism is an economy that kills. At the same time, I will acknowledge that I do attend other services.  I study the Kabbalah from time to time and attend Unitarian Universalist services on a regular basis.

And please do share your own thoughts “from the heart” in the comments box below.